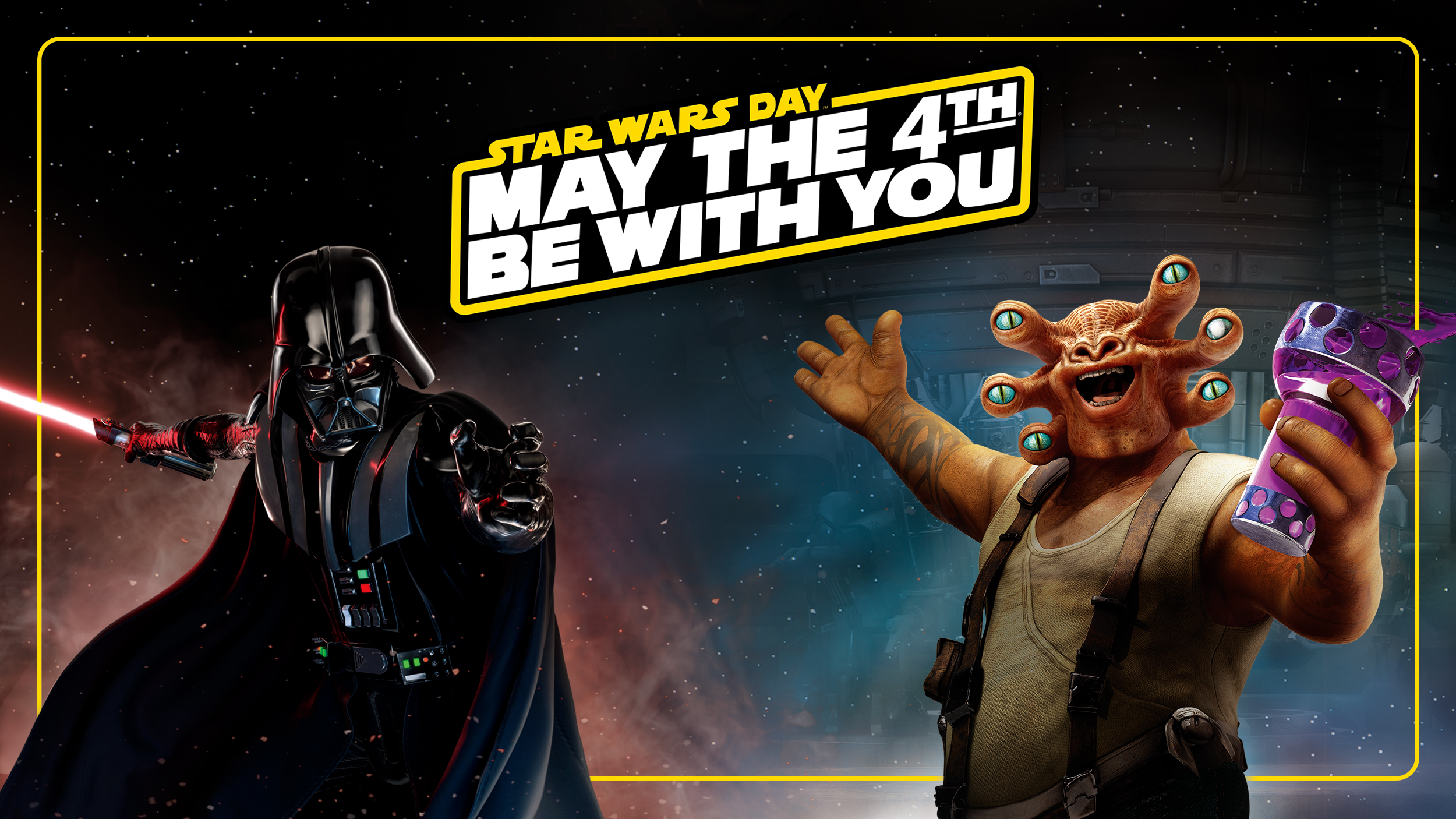 Since our founding in 2015, the team at ILMxLAB has been pioneering a new era of interactive storytelling through virtual and mixed reality experiences. Being part of ILM and Lucasfilm, we have the unique opportunity to extend the Star Wars galaxy with new types of immersive entertainment.

To celebrate May the 4th, we’ll be recounting some of the highlights of our projects in a galaxy far, far away. We’ve traveled from Tatooine to Mustafar to Batuu and beyond – learning many lessons along the way – and brought fans entirely new styles of Star Wars stories.

In Trials on Tatooine, fans are transported to the desert world of Tatooine, where they can repair the iconic Millennium Falcon, and defend the plucky droid hero R2-D2 from incoming stormtroopers in this captivating experience set after the events of Return of the Jedi.

“Trials was our very first foray into storytelling in virtual reality, started in the earliest days of our studio. The project began as an internal experiment with no intention of releasing it. We sought out to answer broad and investigative questions like “how do you successfully tell story in VR?” and “what happens when you lose control of the camera and the story unfolds all around you?” Trials came together quickly and it not only allowed us to start answering these important questions about storytelling in virtual reality, it was absolutely delightful. Holding a lightsaber in VR for the first time, and deflecting actual blaster bolts from a trooper – well, that’s something that all fans dream of. Eventually, we knew we had something special and were able to release Trials free for fans. The project is important not only for our history, but because the work was foundational for Vader Immortal’s lightsaber elements.”

Travel to everyone’s favorite dusty planet, check it out now on Steam for free.

In Star Wars: Droid Repair Bay, Poe Dameron’s sidekick needs your help. Repair BB-8 and his astromech droid friends, each with their own unique personalities, so they can roll back into the fight against the First Order. Aboard General Leia’s ship in the depths of space, you’ll need to work quickly before battle breaks loose just outside the droid repair bay.

“Droid Repair Bay was one of our earliest projects where we explored ways to make our experiences more accessible in different ways. The project was inspired by a smaller project called Meet BB-8, a short endearing VR experience where you could pet and play around with BB-8. Similarly, in Droid Repair Bay, we allowed you to interact not only with BB-8 but also some new droids with different personalities. We sought to surpass language barriers, and in order to do so, we avoided relying on captions and dialogue to tell the story. Instead, we focused on highlighting the reactions and personalities of each character. We also sought ways to make the interactions meaningful and natural, without requiring a complicated series of steps. After performing several playtests and listening to the feedback, we made changes to our experience to make it more accessible. Droid Repair Bay is important to us not only because of these learnings, but also because it paved the way for other experiences like Project Porg.”

Hang out with droids in your very own home with Droid Repair Bay, now free on Steam.

An immersive location-based experience, Secrets of the Empire gave fans the opportunity to play together in teams of four to work with the rebellion and recover Imperial intelligence vital to the rebellion’s survival. Alongside the pragmatic droid K-2S0, your team had to navigate through an enemy facility walking into danger at every turn. Disguised as stormtroopers, fans would use blasters, solve puzzles, and fight giant lava monsters in an effort to fulfill the team’s orders.

“In the very early days of our then “untitled Vader VR” project, the opportunity to create an entirely new – and completely unique – immersive 4-D VR experience arose which ultimately turned into Star Wars: Secrets of the Empire. At ILMxLAB, we have always been exploring ways to tell connected stories, and this was an early example of that. Secrets’ storyline connected directly to Vader Immortal, and we were lucky enough to have a lot of cross pollination of our key creatives between the two projects. Namely, David S. Goyer wrote both stories, and many others within ILMxLAB like Mark S. Miller (executive producer) and Ben Snow (VFX supervisor and director) were all on board to ensure compelling and tight integration between the two experiences. Secrets of the Empire was like no other Star Wars immersive experience to date, as it truly transported you to the world of Mustafar. Smelling the ash of the lava planet, and feeling the heat of molten rock as you and your team of 4 snuck into an imperial facility to recover key intelligence for Cassian Andor (Diego Luna) and the fledgling rebellion – well,  you had no choice but to accomplish your mission.”

In Project Porg, fans were able to bring home the adorable creatures from Star Wars: The Last Jedi. Our first consumer-focused AR project, this was an exciting opportunity to take interactivity to a new level, mixing Star Wars with the real world around fans in their own homes. You gain the trust and affection of your porgs over time by feeding them, playing with them, and teaching them how to get around your real-world environment with a little help from the galaxy’s most meticulous droid, C-3PO.

“Our mission at ILMxLAB has always been to “Step Inside Our Stories,” and Star Wars: Project Porg was our first Augmented Reality release. Available on the Magic Leap One, Star Wars: Project Porg can bring the beloved characters from the Star Wars universe to your own home. After receiving messages from C-3PO, voiced by Anthony Daniels, guests could play with and build a family of porgs. Watching a porg jump from the floor up onto your sofa, then curl up and take a nap, is a very special and heartwarming thing to experience! We also made a special version for Magic Leap’s Creator Con, where the porgs were able to directly interact with smart devices, like speakers, room lighting, and they’d even sit down to watch a Star Wars film with you. We’re incredibly excited for AR storytelling, and can’t wait for the opportunity to share even more of what we’ve been working on.”

You can learn more about Project Porg here.

Vader Immortal: A Star Wars VR Series was ILMxLAB’s most ambitious project at the time. Working with acclaimed writer David S. Goyer, we wanted to give fans the most immersive experience with everyone’s favorite Lord of the Sith.

“Vader Immortal was the culmination of all of our VR demos and experiments since the inception of ILMxLAB. After a long story development and testing period in which the player was merely an observer, we pivoted to the idea of making you a key participant in the action. The demo we did for the interrogation scene really proved-out that concept and showed us the effectiveness of direct character interaction. When Lord Vader is staring you down and demanding your attention and obedience, the immersion into the world of Star Wars is unavoidable (and amazing!).  Coupling this kind of active participation in the story with interactive tasks and challenges, really worked to move you along through the adventure. After solving puzzles and navigating your way through Vader’s fortress, you enter the training dojo and get to realize your (everyone’s!) lightsaber-weilding-dream-come-true. This room was so fun and addictive that we decided to make a totally separate Lightsaber Dojo level, where you could test and hone your Jedi skills for hours. You end up needing all of that skill to make your way through the ancient ruins below the planet’s surface and help solve the mystery of what happened to Mustafar and what Vader is up to. As each of the ensuing episodes came together, we kept upping the ante in the accompanying Dojos and giving you a chance to stretch your Force powers. In the end, all of your newly-acquired knowledge is required, as you confront Vader himself in his private sanctuary. “

Vader Immortal has special deals for both PlayStation VR and Meta Quest. You can also purchase the physical version for PlayStation VR through Perp Games.

With Star Wars: Tales from the Galaxy’s Edge, fans can live their own Star Wars adventure. It takes place on the outskirts of Black Spire Outpost, as depicted in Star Wars: Galaxy’s Edge, the epic lands at Disneyland Resort in California and Walt Disney World Resort in Florida. You’ll play as a droid technician operating near Batuu, but when a group of Guavian Death Gang pirates attack you’ll be forced to jettison the ship’s mysterious cargo and head for an escape pod. After crashing on Batuu, you’ll explore the outskirts of Black Spire Outpost, and learn how the actions of one person can change the galaxy. In Last Call, the add-on and epic conclusion, you work with Dok-Ondar to recover an ancient artifact, infiltrate a First Order Facility, and step into two more of Seezelslak’s Tales: the follow-up to Ady Sun’Zee’s story, and an action-packed mission where you play as IG-88.

“Tales from the Galaxy’s Edge was all about connection – expanding the world of Galaxy’s Edge as seen in the parks and sharing previously untold stories within the Star Wars universe – with our intrepid Cantina keeper, Seezelslak, acting as the bridge between the two. We wanted to create an experience that built on what we did in Vader Immortal, allowing the player to live an adventure in VR. That led to creating a story that happened adjacent to Black Spire Outpost – while also allowing them to travel back in time to the High Republic era, to experience what it’s like to be an assassin droid, and to take on a bit of Jedi Training in our Tales. Being able to explore Black Spire Outpost in the real world, and then to help imagine how it might expand, was a huge motivation for the team working on Tales.”

You can jump into Star Wars: Tales from the Galaxy’s Edge and Last Call for 50% off on the Meta Quest.

Are you interested in checking out virtual reality and heading to the Orlando, FL area? From May 2 through July 21, head to Disney Springs® at Walt Disney World® Resort to experience the Meta Quest preview of Star Wars: Tales from the Galaxy’s Edge!

In the preview, you’ll don a VR headset and meet our 5-eyed Azumel bartender, Seezelslak (Bobby Moynihan), plus everyone’s favorite Droid Depot proprietor, Mubo. In the cantina, play repulsor darts and take a turn on the chromarimba – or head out to the Batuu wilds and face-off against the Guavian Death Gang.

Fans who complete the experience on May 4, 2022, will receive an exclusive poster to celebrate the galactic holiday. For more details, head here.

Special thanks to Elizabeth Walker, Mark Miller, Stephanie Tong, Alyssa Finley, and Michael Koperwas for their contributions to this blog.