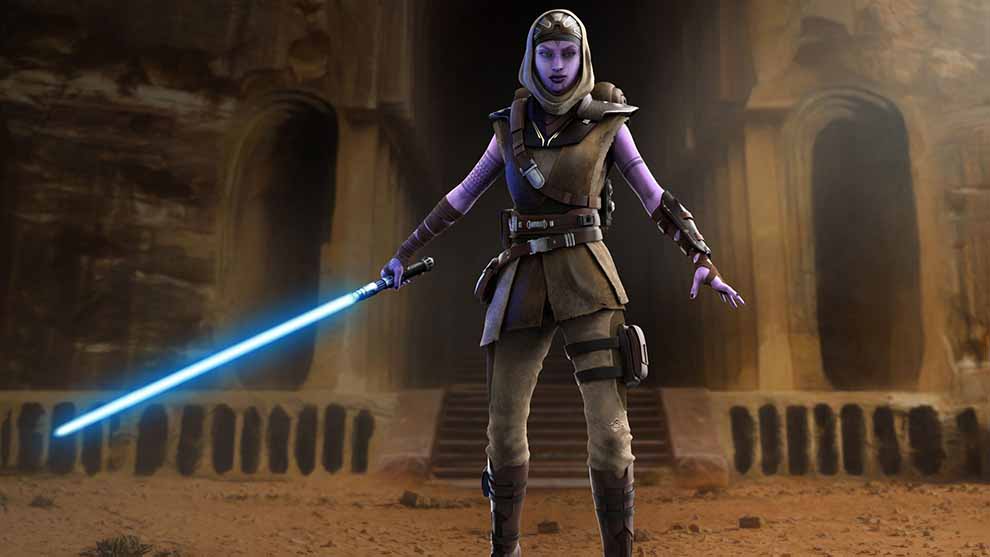 Enter ‘Temple of Darkness’ in Star Wars: Tales from the Galaxy’s Edge

Right off the heels of our announcements last week, we’ve got all the details on Star Wars: Tales from the Galaxy’s Edge’s short VR story, Temple of Darkness, featuring everyone’s favorite Jedi: Master Yoda.

Part of the greater Tales from the Galaxy’s Edge experience, Temple of Darkness is set hundreds of years before the events of Star Wars: The Phantom Menace. Thanks to the storytelling skills of Seezelslak (Bobby Moynihan), an Azumel bartender with a cantina on the outskirts of Black Spire Outpost, you’ll step into the role of Ady Sun’Zee, a Jedi Padawan studying at a remote Jedi research facility on Batuu. When a mysterious relic unleashes a torrent of evil inside the temple, Ady is the sole survivor. After sending an urgent distress signal to the Jedi Council, she (and you!) must work alongside Jedi Master Yoda (Frank Oz) to confront the darkness that now lurks within the temple walls — and within herself.

“Temple of Darkness in Tales from the Galaxy’s Edge will give Star Warsfans an opportunity to step into a story set during The High Republic era on an incredibly transportive platform,” said James Waugh, Vice President, Franchise Content & Strategy at Lucasfilm. “It will be one of the first tales released taking place in this bold, adventurous new era for Star Warsstorytelling which we intend to see traverse multiple mediums over many years. We’re so proud of what so many incredibly talented authors, developers, licensing partners, and Lucasfilm colleagues, have crafted together — it has been a labor of love.”

“This powerful short story will transport fans back in time, hundreds of years before the Clone Wars. Through the power of virtual reality, they’ll get their first glimpse of Jedi life during The High Republic,” said director Jose Perez III. “Everyone at ILMxLAB is thrilled to help usher in this new era of Star Wars storytelling, and I can’t wait for fans to encounter Jedi Master Yoda and Padawan Ady Sun’Zee on November 19th.”

Master Yoda in Temple of Darkness from Star Wars: Tales from the Galaxy’s Edge.

The High Republic is set hundreds of years ago, in an era where the Galactic Republic and the Jedi Order are at their zenith, serving and protecting the galaxy. This period on the Star Wars timeline is entirely new, providing the opportunity to tell Star Wars stories in a never-before-explored fictional space. The initiative will feature interconnected stories, spanning multiple platforms and mediums, with an initial focus on publishing starting in January.

Experiencing Temple of Darkness is just one part of the rich world of Tales from the Galaxy’s Edge. In the main experience, you play a droid repair technician who crash-lands on the outskirts of Black Spire Outpost on the planet Batuu, as depicted in Star Wars: Galaxy’s Edge, the new immersive epic lands at Disneyland Resort in California and Walt Disney World Resort in Florida. There you will adventure alongside familiar characters like R2-D2 and C-3PO (Anthony Daniels), and face new enemies like pirate leader Tara Rashin (Star Wars Jedi: Fallen Order’s Debra Wilson). You will also meet Seezelslak (SNL’s Bobby Moynihan), a talkative cantina owner who tells epic tales that you will actually be able to step into, experiencing other eras and locations of the Star Wars galaxy for themselves.

Along with Frank Oz as Yoda, Temple of Darkness also features Ellie Araiza as Ady Sun’Zee, with an approximate running time of 15 minutes. Star Wars: Tales from the Galaxy’s Edge will be available on November 19th for the Oculus Quest platform, priced at $24.99.